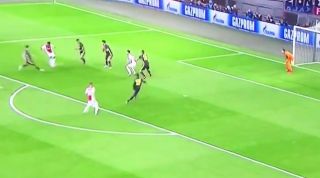 Cristiano Ronaldo gave Juventus the lead against Ajax just before half-time, but David Neres struck almost immediately after the interval to level things up.

The two European giants met in Amsterdam on Wednesday night in the first leg of their Champions League quarter-final tie, and the Bianconeri grabbed a vital away goal through their talisman.

It was a wonderful goal from the Portuguese superstar as his diving header found the back of the net, but he was outdone by Neres, with this sensational strike from long distance as seen in the video below.

The 22-year-old cut in onto his right foot and let fly with a wonderful effort to draw his side level and right back into the tie as they hope to travel to Turin next week with a positive result to defend.

With more quality like this, they will certainly fancy their chances as the home faithful were undoubtedly buoyed to see them get back into the game so early in the second half.