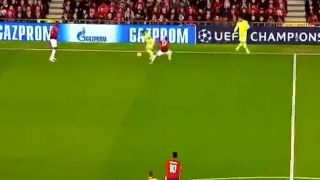 Lionel Messi was in the thick of the action in Barcelona’s first leg clash with Manchester United in their Champions League quarter-final tie.

After providing the assist which led to Luke Shaw’s own goal to open the scoring, the Argentine was also left with a bloody face after an over-zealous challenge from Chris Smalling.

Sandwiched in between those two incidents though, was this bit of wonderful skill from the Argentine icon as he left Fred dancing around him and eventually trailing behind, and he did so barely touching the ball.

The 31-year-old now has 43 goals and 22 assists in just 41 appearances so far this season, while beyond the statistics, there are magical little moments like this which keep us all entertained and mesmerised by his quality.

It’s undoubtedly a tough task for any defender or midfielder to try and keep Messi quiet, and it doesn’t look as though Fred is going to have much luck at Old Trafford on Wednesday night.