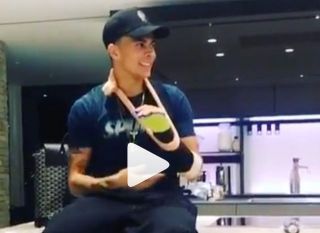 With concerns over Harry Kane already, Tottenham could seemingly be dealt more bad news on the injury front with regards to Dele Alli.

As noted by The Sun, the 22-year-old was forced off during the first leg of their Champions League quarter-final tie against Manchester City on Tuesday night.

Alli was seen holding his arm in the closing stages of the encounter, and that would undoubtedly have raised concern over the seriousness of his knock.

However, that was arguably overshadowed by the fact that Kane was forced to limp straight down the tunnel after sustaining what looked to be a serious ankle injury after a challenge with Fabian Delph.

As per BBC Sport, Mauricio Pochettino has already conceded that his talisman could now miss the rest of the season, but further scans and tests will undoubtedly reveal the full extent of the blow this week.

Unfortunately for the Argentine tactician though, it appears as though that isn’t the only injury blow he may have to deal with, as Alli will undoubtedly now raise concern after being spotted wearing a cast on his injured arm, as seen in the video below.

Kane has bagged 24 goals and six assists so far this season, while Alli has added seven goals and five assists in 29 outings.

Taking those two out of the team will be a massive blow for Spurs, particularly given that they are trying to battle on two fronts still with their Champions League aspirations and the scrap for a top-four finish in the Premier League reaching its climax.

The last thing they need is to be left without their leading attacking stars, but that is now seemingly a real threat at this stage given both suffered what look to be serious injuries against City, which will be good news for their rivals Arsenal, Chelsea and Man Utd too in the battle for a place in the top four.

My bro @dele vibzing to my new tune after his big champions league win last night ?? gutted you won’t be playing fortnite for a while ? MAKE IT RAIN OUT ALL PLATFORMS ????