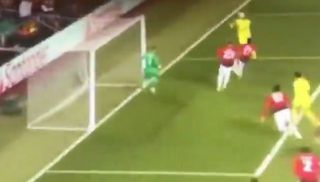 Barcelona took just 12 minutes to break the deadlock against Man Utd at Old Trafford, with a Luke Shaw own goal opening the scoring for the visitors.

The Catalan giants enjoyed plenty of possession early on in the first leg of their Champions League quarter-final tie, and it eventually paid off.

After a ball over the top found Lionel Messi in the box, the Argentine ace delivered a cross to the back post for Luis Suarez, who saw his header take a touch off Shaw on its way into the back of the net, as seen in the video below.

The goal was initially ruled out, but after a VAR check, it was awarded to Barcelona who grabbed a crucial away goal, with replays showing that Shaw did indeed have the last touch as BT Sport later confirmed that it had been officially taken away from Suarez.

He won’t mind too much though, as Barcelona will be delighted to have bagged a goal so early on, with United having it all to do already to take a positive result to the Nou Camp next week.