Despite rumours that Milan Skriniar is set to sign a contract renewal with Inter, it’s claimed the Barcelona and Real Madrid transfer target could still be sacrificed this summer.

As seen in the tweet below from Sky Sport Italia, it was suggested on Thursday evening that terms had been agreed for the Slovakian international to sign a new deal with the Nerazzurri till 2023.

On one hand, that could be a major indication that they have no interest in selling their defensive star, who has been a key figure in their progress over the last two years with Inter returning to the Champions League.

However, according to Calciomercato, it’s suggested that despite the renewal, Inter will still look to sacrifice the 24-year-old in order to finance their own spending spree this summer.

It’s added that they value Skriniar at €100m, while both Barcelona and Real Madrid are specifically mentioned as potential destinations with a swap deal involving the likes of Luka Modric and Ivan Rakitic also being proposed.

Time will tell what the renewal means for Skriniar’s future, albeit there hasn’t been an official announcement yet, but the report above would suggest that Inter are perhaps making a savvy business decision to try and maximum what they can demand for him this summer.

Skriniar joined Inter from Sampdoria in 2017, and has gone on to make 75 appearances for the club having established himself as a mainstay in Luciano Spalletti’s starting line-up.

With that in mind, it surely doesn’t make any sense for the club to sacrifice him for other signings, as ultimately they would be losing a key figure and weakening themselves in defence.

However, it has long been speculated that Diego Godin is set to join the Italian giants on a free transfer this summer, as noted by Sky Sports, and so perhaps the Uruguayan stalwart will fill the void that Skriniar leaves behind. 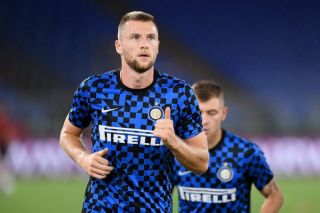 Liverpool looking elsewhere for centre-back replacement after being priced out of the market by Serie A giants Dec 30 2020, 11:38
Liverpool FC