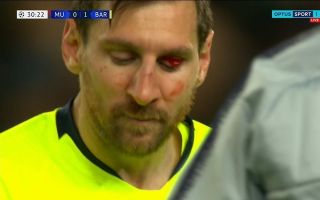 Lionel Messi was left bloodied and bruised after a collision with Chris Smalling on Wednesday night, but the Barcelona superstar will reportedly be fine for the second leg.

The incident occurred in the first half of the first leg in the Champions League quarter-final tie at Old Trafford, with Messi suffering a cut to his eyelid and a bruised nose and face.

The Argentine icon was uncharacteristically quiet thereafter, having produced the assist which led to Luis Suarez heading the ball into the back of the net via Luke Shaw to give the visitors an early lead.

As noted by Mundo Deportivo, further tests were required on Thursday to determine whether or not Messi had suffered anything more serious, but fortunately for the Catalan giants it has been suggested that he has been given the green light to even feature this weekend.

Barcelona take on bottom-of-the-table Huesca on Saturday, and given that they already boast a commanding lead at the top of the La Liga table, it’s highly likely that coach Ernesto Valverde opts to rest Messi regardless of whether or not he was struggling with an injury.

However, the report adds that Messi is expected to get the green light to feature in the second leg against Man Utd at the Nou Camp next Tuesday night, as they hope to finish the job and advance to the last four after returning home with a vital away goal.

Messi, 31, has bagged a staggering 43 goals and 21 assists in just 41 appearances so far this season, and so that tells its own story as to how influential he is for Barca and how important he will be to their hopes of completing a treble this season.