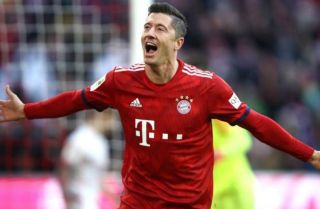 Tempers flared in Bayern Munich training this week as it’s claimed that Robert Lewandowski was involved in a heated bust-up with Kingsley Coman.

The Bavarian giants face Fortuna Dusseldorf on Sunday afternoon as they hope to take another step towards winning the Bundesliga title this season.

Niko Kovac’s side sit top of the standings but just a point above title rivals Borussia Dortmund, and so their full focus has to be on this weekend to avoid any slip-ups.

However, as noted by Bild, their preparations have taken a blow as it’s reported that Lewandowski and Coman had a punch up during training this week after the former said something to the Frenchman to infuriate him.

It’s reported that both were struck in the face in the fracas before their teammates separated them. Further, Kovac ultimately allowed them to continue the session and work out their differences.

It remains to be seen if it has an adverse affect on Bayern ahead of the weekend, but it’s certainly an unwanted distraction as they’ll all need to be pulling in the same direction to ensure that there’s a successful end to the campaign.

Lewandowski has been in fine form again this season, scoring 35 goals and providing 13 assists in 39 appearances, but time will tell if his 21 league goals will help Bayern to yet another domestic title.