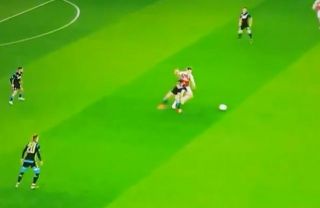 Aaron Ramsey is set to join Juventus this summer, and he certainly looks more than comfortable playing against their current rivals Napoli.

The Welshman broke the deadlock in the first leg in their Europa League quarter-final tie at the Emirates on Thursday night, finishing off a brilliant Arsenal team move.

However, before that he produced a wonderful bit of skill to evade Allan and break free to kick-start another Gunners attack, as seen in the video below.

While Arsenal fans will hope to see much more of this over the two legs to help them take another step towards a major trophy this season, Juve supporters will also be keeping a close eye on their summer recruit and will surely be excited to see what Ramsey can bring to the team.

Allan is widely regarded as one of the top midfielders in Europe with his combative and tenacious style of play, but he simply had no answer to stopping Ramsey on this occasion.