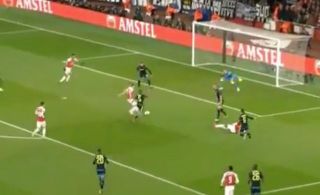 Arsenal drew first blood in the first leg of their Europa League quarter-final tie with Napoli as Aaron Ramsey bagged the opening goal.

The visitors looked a threat early on, but it was the Gunners who broke the deadlock through Ramsey after a wonderful team move, as seen in the video below.

Following some patient build-up play, Ramsey was found in space in the box and the Welshman produced a composed finish to give his side the lead.

It will undoubtedly be crucial for Unai Emery’s side to take a positive result with them into the second leg next week, and Ramsey has certainly given them the perfect start with a stylish goal from start to finish.

From a Napoli perspective though, they’ll undoubtedly be disappointed with the way in which they gave away possession so easily to allow the Arsenal attack to carve through them.

It's a goal! Aaron Ramsey (Arsenal) converts his effort.#follow pic.twitter.com/VdPrQKnKf6

Aaron Ramsey finishes off a brilliant move to put the Gunners ahead!