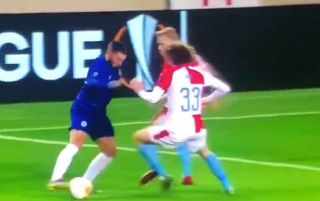 Eden Hazard scored a stunning goal for Chelsea against West Ham on Monday night, and the Belgian was back at it again vs Slavia Prague in the Europa League.

Marcos Alonso scored the only goal of the game to give the Blues an advantage to take into the second leg of their quarter-final tie at Stamford Bridge next week, but Hazard was at his silky best as seen in the video below.

With two defenders in close quarters, the 28-year-old danced his way past them with some brilliant close control and skill to spark Chelsea into life.

Hazard has 19 goals and 12 assists to his name in 42 appearances so far this season, and he will certainly be fundamental to the Blues as they continue to chase Europa League glory and a top-four finish in the Premier League this season.

There are few with the technical quality and balance that he possesses, and it’s clear to see in moments like this where he is able to beat defenders at will and it’s undoubtedly a joy to watch for Chelsea fans and most neutrals.

Time will tell though if Maurizio Sarri’s side can now defend their advantage in the return leg and advance to the last four of the competition as they did toil in general in Prague, with Hazard initially rested and left on the bench for the encounter.