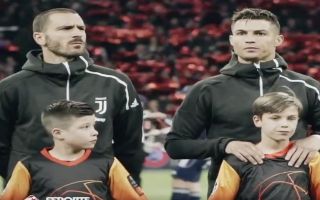 Cristiano Ronaldo acknowledged a young mascot who couldn’t believe he was standing so close to the Juventus superstar at the Johan Cruyff Arena.

The Bianconeri secured a 1-1 draw against Ajax away from home in the first leg of their quarterfinal tie in the Champions League, with Ronaldo grabbing the goal for the visitors.

The five-time Ballon d’Or winner is well known for his arrogant streak on the pitch, but he also showed a humble side off it prior to the match in Amsterdam, as the two teams lined up in front of the crowd.

One young fan who walked out with Leonardo Bonucci, looked over his shoulder at Ronaldo standing next to him and the 34-year-old made his night by smiling at him and affectionately grabbing his ear.

This is the best video you will watch today. This is very simple from Cristiano Ronaldo, but this kid will remember this moment for the rest of his life. The look on his face says it all. ?? pic.twitter.com/Cdfu2ysrdW

This is arguably the best clip you’ll see today. The kids face says it all when @Cristiano looks back…?