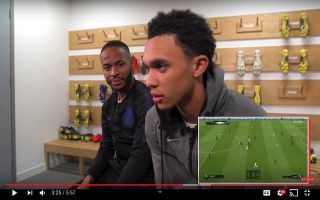 Liverpool full-back Trent Alexander-Arnold well and truly had the wool pulled over his eyes by Manchester City’s Raheem Sterling when the pair played a game of FIFA whilst on England duty.

Manchester City winger Raheem Sterling teamed up with England and professional FIFA player F2Tekkz in order to hilariously prank Liverpool’s Trent Alexander-Arnold in a game of FIFA that has been uploaded to England’s YouTube channel.

Alexander-Arnold was beginning to become extremely frustrated after conceding the first couple of goals, the England international branded Sterling a ‘noob’ and was furious at the star’s ‘keep ball’ style of play.

As soon as the match ended, Alexander-Arnold was told that he’d have to “walk on all fours like a dog” by Tottenham star Dele Alli and you could see the youngster’s face drop at the very prospect of embarrassing himself in front of his teammates.

Once the prank was revealed, the star breathed a sigh of relief once he realised it wasn’t Sterling who hammered him, although the star was still shocked to be on the receiving end of a 5-0 thumping.