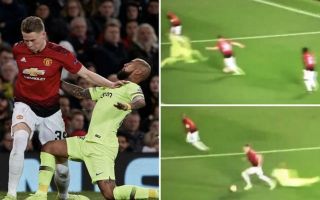 The Spanish champions emerged with a 1-0 victory in the quarterfinal first leg clash thanks to an own goal from Luke Shaw early in the first half after Luis Suarez headed a Lionel Messi cross back across goal.

United struggled to create any clear cut chances on the night, but McTominay was arguably the best player on the pitch, running relentlessly up and down and showing off his technical ability in possession.

He left Vidal floored and embarrassed in one slick moment late in the game, executing a smart feint which completely fooled the Chilean star.