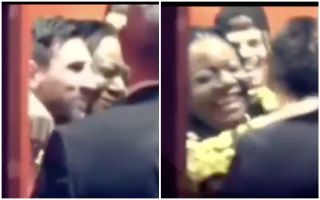 Romelu Lukaku’s mother will have met countless footballers since her son turned professional, but meeting Lionel Messi is clearly a different matter altogether.

The Argentine icon was in action for Barcelona as they secured a 1-0 win over Man Utd in the first leg of their Champions League quarter-final tie at Old Trafford on Wednesday night.

SEE MORE: “He knew it was an accident” – Chris Smalling reveals conversation with Lionel Messi after full-time in Barcelona vs Man United

After the game, he was seen meeting Lukaku’s mother, as captured in the video below, and it looks as though she was absolutely delighted and star-struck to meet the great man.

In fairness, her reaction is probably the same as how 90% of people would react when meeting the 31-year-old, as he has undoubtedly established himself as a superstar both in and out of the game.

Regardless of allegiance and the result, it’s great to see Messi receive such love from the family of the opposition, and rightly so given the brilliance that he has produced year in and year out for Barcelona and Argentina during the course of a glittering career.

? | Lukaku's mother met Messi after the match against Manchester United and appreciated him.