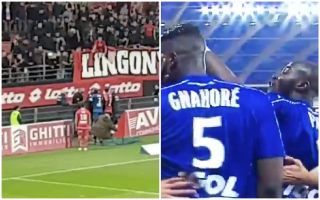 Amiens star Prince Gouano confronted Dijon fans during their Ligue 1 clash on Friday night after he was subjected to racist chants.

As seen in the video below, the 25-year-old spoke with fans behind the goal during the 0-0 draw, as it’s reported that a racist slur was directed at him.

As noted by BBC Sport, the ‘fan’ in question has since been identified and arrested by police, but it’s just the latest in a spate of incidents in recent months which just goes to show that not enough has been done to eradicate racism from football, and more importantly, society.

However, it seems as though Gouano had a great message to send after the game, as he reacted to the incident which saw the game stopped for five minutes, as per the tweet below from Sky Sports.

“Mistakes are human. I’m not angry at them. We need to love those around us,” Gouano said after the game. “We’re in the 21st century, it’s unacceptable. I want to convey a message that is love, that’s all.”

Amiens added on Twitter: “The players will restart but will stop playing if it continues. Total support to our captain Prince Gouano. Racism has no place in a football stadium.”

From the treatment of the England players in Montenegro to incidents this week involving Mohamed Salah and Kalidou Koulibaly, clearly racism is still a very serious problem in football and more needs to be done in and out of the game to educate those guilty of such vile abuse.