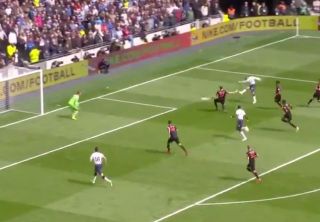 Tottenham were without key players against Huddersfield, but that didn’t seem to bother them too much as they raced into a 2-0 lead.

Victor Wanyama put them ahead with a well-taken goal of his own, rounding the goalkeeper before passing the ball into an empty net to break the deadlock.

It wasn’t long before Spurs were in full control of the game though, as Moura was put in behind and found a stunning finish from a difficult angle to double Tottenham’s lead, as seen in the video below.

The Brazilian ace will be crucial in the coming weeks with Harry Kane and Dele Alli sustaining injury setbacks in midweek against Manchester City in the Champions League, and particularly with Heung-min Son rested this weekend, he stepped up and delivered when Mauricio Pochettino needed him to.

Spurs know that a win will temporarily move them back up into third place in the Premier League table, as the fascinating battle for a top-four finish continues.

? No Kane, No Problem

Moura fires Spurs 2-0 up against Huddersfield

“I am very happy” – Tottenham attacker verbally commits his future