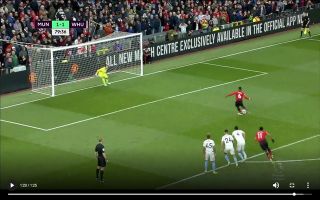 Manchester United have snatched the lead against West Ham in the 80th minute of today’s clash, the Red Devils were awarded a penalty after a frightening counter-attack.

Just moments after David De Gea made a vital save to deny Michail Antonio, United went on the counter-attack, Anthony Martial charged towards goal and was eventually brought down by right-back Ryan Fredericks.

Pogba stepped up for the penalty and fired it into the bottom left corner, Lukasz Fabianski dived the right way but had no chance of stopping the penalty that was perfectly tucked away by Pogba.

Check out the penalty and the foul leading to it below:

Another cool penalty from Pogba who puts us in the lead once again ? #MUFC pic.twitter.com/BVV5atXrYS

Please follow @goalstv3 to enjoy all goals on time ?