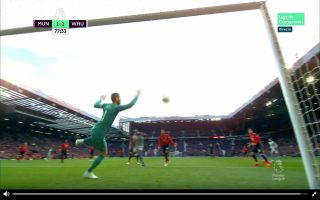 Manchester United goalkeeper David De Gea proved his worth to the Red Devils and his place as one of the world’s best stoppers, with a brilliant save vs West Ham today.

In the 77th minute of the match, United found themselves on the back-foot and an inch-perfect cross from youngster Grady Diangana floated into aerial threat Michail Antonio and the Hammers substitute towered over Fred to head an effort that was destined for goal.

Antonio’s chance to become the super-sub for Manuel Pellegrini’s side was denied by some glorious heroics and cat-like reflexes from David De Gea. The Spaniard shuffled towards the corner and somehow managed to claw the ball away.

De Gea will be delighted with his match-winning heroics, the Spaniard made a costly mistake which led to Felipe Anderson’s goal for West Ham earlier in the game.

I saw it goal but the goat of GKs said NO??

Check out some reaction to the amazing save below:

Spider-Man to the rescue. Great save from De Gea.

Best keeper in the world

Without Da Gea united would’ve been somewhere around 10th position

Save of the Season by De Gea

Redeemed himself for the goal

De Gea’s save literally won United the game, the Red Devils won the game-changing penalty from a counter-attack just moments after the save.