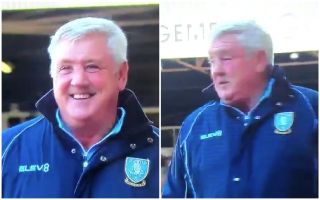 Sheffield Wednesday boss Steve Bruce appeared to be given a fright by a ghost during his side’s clash with Leeds United on Saturday.

His side fell to a 1-0 defeat at Elland Road, which arguably all-but ends their slim hopes of making a late run for the playoffs in the Championship this season.

However, there was a rather odd clip that went viral on social media during the game, as seen below, which shows Bruce seemingly getting a spook despite nothing being around him.

It all starts happy enough as he has a beaming smile on his face as he shares a joke with one of the players, but it suddenly gets very bizarre as it brings back memories of Mick McCarthy getting frightened by a ghost, as seen below.

We’re not sure what it was that spooked Bruce, as it may well have been a very, very delayed reaction to the ball going over his head from behind.

Did Steve Bruce just get scared by a ghost? pic.twitter.com/OD0dvbIWia

Mick McCarthy gets frightened by nothing https://t.co/3RrQ7JIKTZ via @YouTube

Manager vows “we will try our very, very best” to sign Arsenal star