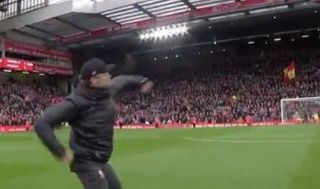 Liverpool secured what could be a decisive 2-0 win over Chelsea on Sunday, and Jurgen Klopp couldn’t contain his delight with the result.

Premier League title rivals Manchester City did their job earlier in the day with a 3-1 win over Crystal Palace, and so the pressure shifted onto Liverpool to respond.

Respond they did as after dominating the first half, they didn’t waste time finding a breakthrough after the break as Sadio Mane headed them into the lead.

Just minutes later, Mohamed Salah produced a contender for goal of the season with a stunning long-range effort to double Liverpool’s lead, and they eventually held on to secure all three points to move back to the top of the table with a two point lead over City.

Pep Guardiola’s men do have a game in hand, but this win was fundamental for the Merseyside giants as it was arguably the toughest test remaining on their fixture list.

They won’t get complacent now, but it was evident to see how much this victory meant to Klopp as seen in his full-time reaction in the video below as he celebrated in front of the Kop End.

Time will tell if this was a defining game in the title race, but Liverpool continue their march towards the big prize.

Think it's fair to say Jurgen Klopp is buzzing with that result.

Liverpool and Barcelona transfer target makes decision on his future