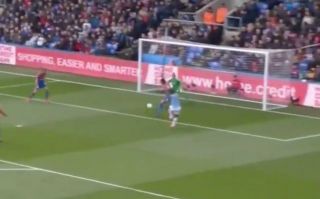 Raheem Sterling was in fine form for Man City at Crystal Palace on Sunday, with his double pushing Pep Guardiola’s side towards a crucial win.

The 24-year-old opened the scoring in the first half with a superb finish, and was on hand to apply the finishing touch to another quality City move after the break, as seen in the video below.

A win would move the defending Premier League champions back to the top of the table ahead of Liverpool’s clash with Chelsea, and so that will undoubtedly pile the pressure on their rivals to respond.

Coupled with the disappointment of losing the first leg of their Champions League clash with Tottenham in midweek, it will certainly be a morale boost for Guardiola’s side ahead of the second leg at the Etihad on Wednesday night.

As for Sterling, that’s now 21 goals and 16 assists in 43 appearances for Man City so far this season, as he continues to lead the way in their bid to land major honours this year.

Sterling doubles our lead! He now has 21 goals in all competitions ? #MCFC #CRYMCI pic.twitter.com/iKIJe0OOLc

Video: ‘We got away with it’ – Southgate unhappy with England’s poor showing