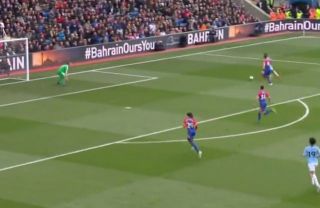 Kevin de Bruyne and Raheem Sterling linked up to score a simply brilliant goal for Man City at Crystal Palace on Sunday.

The pressure was on the defending Premier League champions to win first ahead of Liverpool’s clash with Chelsea on Sunday, and they didn’t take long to go ahead.

Sterling had missed an absolute sitter just minutes earlier as put his effort wide when given an almost open goal to aim for, but the England international didn’t fluff his lines at the second time of asking.

As seen in the video below, De Bruyne produced a wonderful assist as he played a brilliantly weighted through-ball into Sterling’s path as he broke in behind the Palace backline, and despite seemingly going too wide, he produced a world-class finish to break the deadlock.

Both players deserve real credit for this goal as it’s this level of quality that will undoubtedly make the difference as Man City continue to pursue a quadruple this season.

The ball from De Bruyne, the finish from Sterling. ? #MCFC #PALMCI pic.twitter.com/S8kcKgSQ2u

Gary Neville’s baffling England XI to take on Germany in Euro 2020: Arsenal ace in, but duo surprisingly left out