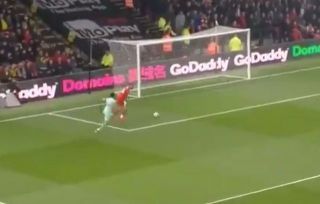 Ben Foster had a moment to forget as the Watford goalkeeper’s misjudgement allowed Pierre-Emerick Aubameyang to give Arsenal the lead on Monday night.

The visitors were ahead after just nine minutes as after receiving the ball back from his defender, Foster appeared to think he had more time than he actually did.

As seen in the video below, that gave Aubameyang the opportunity to close down the space with his lightning-quick speed, and the Arsenal star was able to deflect Foster’s attempted clearance into the back of the net to break the deadlock.

Things got even worse for Watford just minutes later, as Troy Deeney was given a straight red card after catching Lucas Torreira with an elbow.

In turn, the hosts have it all to do at Vicarage Road if they are to get anything from the game as it was a dream start for Arsenal who will hope to go back into the top four in the Premier League table with a win.

Ben Foster will not want to see this again…?

He gifts @Arsenal the lead as his clearance cannons off of Aubameyang and into the back of the net! ?