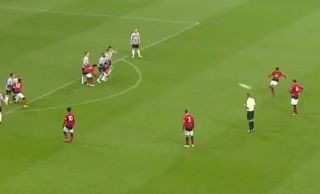 Man Utd U23s were in action on Monday night, and they cruised to a 5-0 win over Newcastle United with Mason Greenwood scoring the pick of the goals.

The 17-year-old has been in fine form this season, scoring 24 goals and providing six assists at youth level for the Red Devils, while making three appearances for the senior side.

Should he continue to produce moments like this, there’s no reason why Ole Gunnar Solskjaer won’t give him more opportunities in the future, as Greenwood scored a superb free-kick to send United on their way to a big win.

As seen in the video below, it was struck from some way out, but Greenwood got the power, flight and bend perfect as it evaded the goalkeeper and hit the back of the net.

Man Utd fans will certainly hope to see more of this in the future but at senior level if the youngster can continue to impress.

Mason Greenwood has just scored this free-kick from 25 yards out. Wow. pic.twitter.com/Fc2ccaHoAY