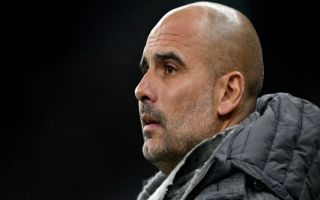 Manchester City winger Leroy Sane might try to force a summer exit, after falling down the pecking order at the club during the 2018-19 campaign.

The German attacker has featured in over 40 matches across all competitions for City this season and scored 15 goals, but in recent weeks he has found himself on the fringes of the action.

The 23-year-old has only started seven of the club’s last 18 games, with Pep Guardiola preferring to use Raheem Sterling and Bernardo Silva ahead of him.

Sane’s last five starts have come against Cardiff, Swansea, Schalke, West Ham and Newport County, which highlights the fact he is not being deployed in the bigger matches heading into the final few weeks of the season.

According to Team Talk, the mercurial star could seek a transfer if his situation doesn’t change between now and May, after growing frustrated with his role under Guardiola.

Sane is a supremely talented player, with pace to burn, superb dribbling skills and an eye for goal, but he is not yet the finished article, despite the impressive numbers he’s posted this term.

Nor is he essential to City’s continued success, given the strength in depth at Guardiola’s disposal and the club’s near limitless financial strength which makes them major players in the transfer market.

That being said, Sane has proven plenty of times that he can offer City a unique outlet on the left-hand side and if he can get his head down and force his way back into Guardiola’s plans, his future at the Etihad Stadium could still be bright.

Transfermarkt states that the Germany international is currently rated at £90 million – a fee which could put off any potential suitors when the market reopens.

Team Talk reports that Bayern Munich, Juventus and Atletico Madrid could be possible next destinations for Sane, but much could depend on their own outgoings this summer.

It would be a shame for Sane to leave the Premier League so prematurely, but a player with his ability should be playing week in week out, which is why this particular story could develop quickly over the next couple of months.