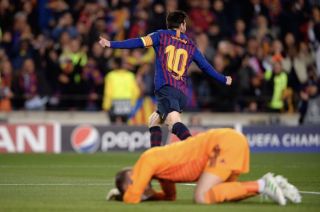 Barcelona secured a 3-0 win over Man Utd on Tuesday night and that resulted in a 4-0 triumph on aggregate in their Champions League quarter-final tie.

Two goals from Lionel Messi in the first half were followed by a stunning strike from Philippe Coutinho after the break to send the Catalan giants into the last four and United crashing out.

The visitors did look a threat early on as they went close to finding a breakthrough, but after missing their chances, Barcelona were clinical and ensured that they advance to face either Liverpool or Porto in the semi-finals.

It’s another setback for Ole Gunnar Solskjaer as his side have been in poor form since he was appointed as permanent boss last month, losing five of their last seven games, although much is expected to change over the summer.

The United faithful have long been singing their famous “Ole’s at the wheel” chant since the Norwegian tactician returned to the club, but Barcelona used that against them after the game as they decided to troll their rivals with a cheeky tweet.

As seen in their tweet below, the reigning Spanish champions decided to tweak the lyrics slightly and replaced Ole with Messi, and it became quite a popular post as fans were delighted with the dig.

For Man Utd, the focus is now on securing a top four finish in the Premier League, while for Barcelona, they have taken another step closer to a potential treble this season with Messi unsurprisingly leading their charge.

Give the admin a beer

PAY RAISE FOR THE ADMIN

Give the admin a pay rise

LMFAOOOOOOOO GIVE THIS ADMIN A RAISE?????

Smalling & Jones vs Messi & Suarez. Ole’s not just at the wheel, but he’s got a great sense of humour as well!