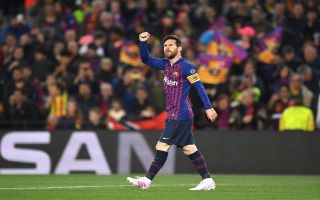 Barcelona superstar Lionel Messi managed to achieve an impressive feat during his mesmerising display against Manchester United this evening. Messi was unstoppable.

Messi became the first player since Tottenham’s Heung-Min Son to score from outside of the box with both his left and right foot in a Champions League game. Son achieved the feat in November 2014 and after a five-and-a-half-year wait, Messi has matched the South Korean’s excellent achievement.

Messi opened the scoring for the Blaugrana in the 16th minute of the clash with a truly world-class strike.

Messi benefitted from a stroke of luck in the 20th minute of the tie, the ace’s ordinary strike on goal hit the back of the net after a disastrous blunder from David De Gea. Take a look here.

Barcelona were sensational against United tonight, Ernesto Valverde’s side have to be considered the favourites for the Champions League after that display.