Liverpool have been paired with a swoop for Bayer Leverkusen forward Julian Brandt this summer, with his release clause standing at £21.5m.

The 22-year-old has been in fine form so far this season, scoring seven goals and providing 14 assists in 38 appearances for the Bundesliga outfit.

Further, he already has 24 caps for Germany to his name, and so it would appear as though he has a bright future ahead of him for club and country.

However, according to Sport Bild, as translated by The Mirror, it’s been suggested that Liverpool could try to prise him away from his homeland and take him to Anfield to bolster Jurgen Klopp’s attacking options.

The German tactician has one of the most effective trident’s in Europe at his disposal currently, with Mohamed Salah, Roberto Firmino and Sadio Mane keeping them on course for a Premier League and Champions League double this season.

Beyond that trio though, the likes of Daniel Sturridge, Divock Origi and Xherdan Shaqiri all offer alternative options, but it could be argued that quality depth is needed, particularly with Sturridge set to leave this summer on a free transfer when his contract expires.

That appears to be where Brandt comes in as he could provide a long-term solution in that department, and in today’s inflated transfer market, his rumoured £21.5m release clause could make him a very sensible addition both on and off the pitch.

Nevertheless, both Juventus and Real Madrid are named as competition for his signature,  while the Mirror go on to note that Liverpool have also been paired with an interest in RB Leipzig ace Timo Werner, although he is valued at £35m.

In turn, Brandt could be the smarter option of the two depending on Liverpool’s budget this summer, although Werner is enjoying another prolific campaign having scored 17 goals in 31 outings.

It’s unlikely both will be signed, and so Brandt could emerge as the preferred Plan B. 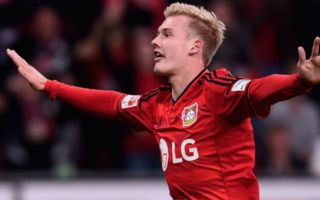