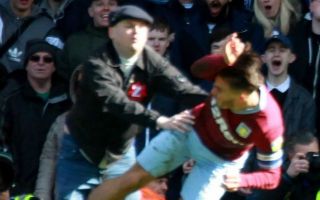 The Birmingham City ‘fan’ who punched Jack Grealish during the Second City derby last month has insisted that he won’t apologise for his actions.

The incident occurred on March 10 at St. Andrews, when Paul Mitchell was able to get onto the pitch and directly headed for Grealish before punching him to the ground.

Fortunately, the Aston Villa star wasn’t hurt, and he went on to score the winner in the clash as Dean Smith’s side haven’t looked back since as they’ve rattled off eight consecutive victories to cement their place firmly in the playoff race.

However, as reported by The Sun, Mitchell has now been released from prison after the attack, and it doesn’t sound as though he’s particularly remorseful over his actions.

“It was the best month of my life. It was hard being away from my family but everything was good,” he is quoted as saying in the report.

“I’m not prepared to discuss that. I’m not apologising for nothing.”

Villa and Grealish have seemingly put the incident behind them, as their focus now will be on securing promotion to the Premier League for next season.

However, Mitchell won’t be watching Birmingham in action again, and he’ll more than likely receive a heavy backlash for these latest reported comments he’s made on the matter after being released early in his purported 14-week sentence.