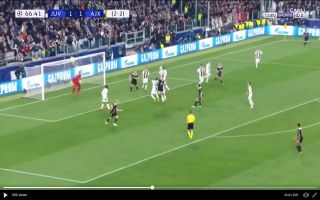 Ajax captain Matthijs de Ligt led by example for the Dutch giants this evening, the Barcelona target scored a superb header to knock Juventus out of the Champions League.

In the 66th minute of the clash, the 19-year-old climbed above both Alex Sandro and Daniele Rugani to fire a superb header into the back of the net.

Ajax have proved that their heroics against Real Madrid were by no means a fluke, the Dutch giants have stunned Cristiano Ronaldo and Juventus, by knocking them out of the Champions League.

Could Erik ten Hag’s side shock the world once again and make their way to the final?

De Ligt will be at the top of the shopping list for most of Europe’s elite this summer. According to The Evening Standard, Barcelona are hoping to sign the Netherlands international after securing the signing of his teammate, Frenkie de Jong.

If there was any doubt around De Ligt’s ability, those are all out of the window after today.