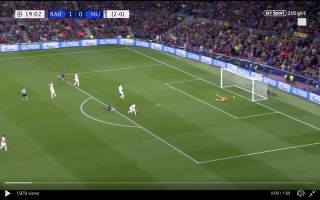 Lionel Messi has scored his second goal against Manchester United this evening, the star had a shocking blunder from United’s David De Gea to thank for his effort going in.

Messi picked up the ball outside the box after Philippe Coutinho dispossessed United midfielder Fred, the five-time Ballon d’Or winner charged forward before firing a shot on goal, the star slipped whilst taking the shot and it looked as though his half-hearted effort would be easily saved.

De Gea’s mind must have been elsewhere, the United No.1 somehow managed to let the ball roll through his hands and into the back of the net.

Lionel Messi has his second, but has David de Gea to thank for it…

The ball squirms under the Man Utd keeper as Barcelona go 2-0 up. pic.twitter.com/5IrkRJ3SyH

Even the most consistent goalkeepers make costly mistakes now and then, former West Brom and current Watford stopper Ben Foster sympathised with De Gea after his error. The retired England international made a costly mistake for Watford in their loss against Arsenal last night:

Eeeee Dave, it happens to the best of us? #BarcaMUFC

Manchester United will have little chance of clawing a comeback against the Spanish giants after De Gea’s costly mistake.