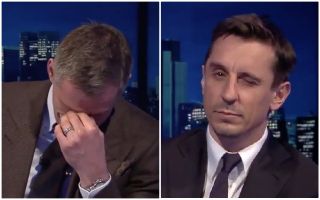 Gary Neville has suggested that Man Utd could rotate their line-up for their crunch clash with rivals Man City next week, and Jamie Carragher wasn’t impressed.

Over the next 12 days, United face Barcelona, Everton, Man City and Chelsea, a run of games which could ultimately define their season and be decisive in the battle for a top four finish in the Premier League.

Currently, they sit in sixth place in the standings and two points adrift of Arsenal, while Tottenham are a point further ahead and Chelsea are sandwiched in between having played an additional game.

With that in mind, Neville’s strategy of prioritising the Chelsea game doesn’t quite add up, but evidently he’s either having some fun or genuinely hopes that United could end up playing a part in denying Liverpool the title.

Jurgen Klopp’s men currently sit two points ahead of City, although their rivals have a game in hand which comes against United and so they will be desperately hoping that their bitter old rivals at Old Trafford can do them a favour.

It remains to be seen if that happens, but Neville has suggested that if Man Utd were to beat Everton on Sunday, then the game that Ole Gunnar Solskjaer would potentially look at making changes for would be the clash with City.

That would then potentially hand Pep Guardiola’s side an advantage in the title race if they went on to win that game.

Carragher wasn’t impressed though as he suggested that everyone is against Liverpool trying to win the title in a light-hearted manner, with Neville coming back by suggesting that Sky Sports “has been Liverpool TV for the last month”.

It remains to be seen what Solskjaer decides to do, as while helping to deny Liverpool title glory is one thing, losing to their own city rivals is a result that he won’t want to oversee either.

'@ManUtd, @Everton and Sky Sports – you're all desperate to stop @LFC winning the league!' ?

"It's been Liverpool TV for the last month!" ?@Carra23 isn't having @GNev2's suggestion that @ManUtd should be resting players against @ManCity…? pic.twitter.com/GsflXYMyct