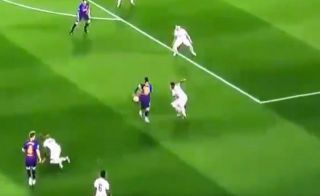 As is often the case, Lionel Messi made a decisive impact for Barcelona when they needed him most as he scored twice against Man Utd on Tuesday night.

The Catalan giants looked a little shaky in the opening stages, as Marcus Rashford glanced the crossbar early on as United created some dangerous situations to cut out their 1-0 deficit from the first leg.

However, their lack of cutting edge in the final third was their downfall as Messi took over shortly after and scored two goals in quick succession.

The first was undoubtedly the better of the two, as he produced a wonderful finish to beat David de Gea, while the Spanish goalkeeper was at fault for the second as he should have done better to deny his tame effort.

As seen in the video below though, Fred will want to forget the opening goal, as the Brazilian was brilliantly nutmegged by Messi as the 31-year-old dribbled his way to the edge of the box.

It’s not the first time that Fred has been left embarrassed by the Argentine icon, as he was also tricked by some wonderful skill in the first leg too, as seen in this video, and so it appears as though he hasn’t learned his lesson in trying to stop the Barcelona talisman.