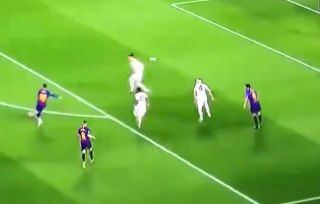 It was that man again for Barcelona on Tuesday night, as Lionel Messi gave them the lead in their clash with Man Utd in the Champions League.

The Catalan giants held a 1-0 advantage from the first leg, and after a shaky start with United creating some dangerous opportunities, Messi took charge of the tie.

As seen in the video below, he produced a stunning goal for his first as he dribbled his way to the edge of the box before producing a superb strike to beat David de Gea.

It was pin-point perfect from the 31-year-old who has now scored 10 goals in eight Champions League games so far this season, having doubled his tally for the night just minutes later to put Barcelona in full control of the tie and heading for the semi-finals.

In contrast, United will be bitterly disappointed as after going close to breaking the deadlock early on, they were made to pay for not being clinical enough.

We are blessed to watch him play football ?