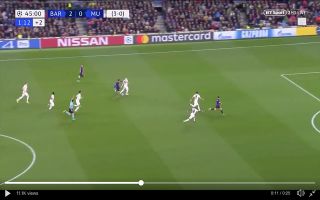 Barcelona superstar Lionel Messi showcased his expert dribbling against Manchester United this evening, the star destroyed Phil Jones with some magical skill in the first-half.

Right on the brink of halftime, Barcelona showed that they weren’t prepared to give United a moment’s rest when Messi picked up the ball on the halfway line and sparked a dangerous attack.

The five-time Ballon d’Or winner held off Jones’ challenge before pulling off a lovely spin to get away from the former Blackburn star, that wasn’t enough for Messi though. The star nutmegged Jones for good measure and turned him inside and out before playing in Jordi Alba.

United nearly found themselves 3-0 down but David De Gea produced an excellent save to deny Sergi Roberto.

Check out Messi’s magical footwork below:

How do you defend this man?! ???? pic.twitter.com/LhWWJgLESi

That is just rude

What a player of our generation

Nutmegging and mugging off players for fun tonight the criminal that he is ?

Messi and Co. were starting to run United ragged before the end of the first-half and Ole Gunnar Solskjaer will be hoping that his side aren’t embarrassed anymore in the second-half.