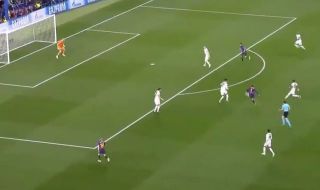 Barcelona were in fine form on Tuesday night, as Philippe Coutinho gave them a commanding 3-0 lead over Man Utd with a wonderful strike.

Leading 1-0 from the first leg of their Champions League quarter-final tie, the Catalan giants gradually took full control of proceedings in the second leg at the Nou Camp.

Two goals from Lionel Messi in the first half sent them on their way towards a comfortable victory, with Coutinho adding the icing on the cake as seen in the video below.

The Brazilian international has struggled to hit top form this season, but he showed the quality that he possesses with a wonderful long-range strike to beat David de Gea.

That’s now eight goals and five assists in his last 14 Champions League games, and so while he hasn’t been at his best, he’s still managing to make a decisive impact in Europe.

With Barcelona 4-0 up on aggregate, United have seemingly been made to pay for not taking their chances in the opening stages of the game at the Nou Camp, with Barca making no such mistakes in the final third with some world-class finishing.

Coutinho just did this to United ? #LFC #FCB pic.twitter.com/RjXmkqkMcn

Philippe Coutinho LOVES a goal from outside the box!

Pure class, what a strike ? pic.twitter.com/dHVPnkVcXd