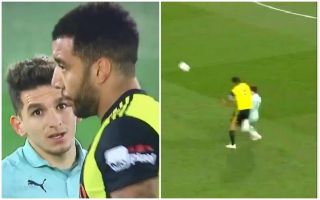 Watford slipped to a 1-0 defeat to Arsenal on Monday night, and they suffered a big blow early on after Troy Deeney was sent off after just 11 minutes.

The incident happened just minutes after Pierre-Emerick Aubameyang had pounced on an error from Watford goalkeeper Ben Foster to give the Gunners the lead.

Things went from bad to worse for the hosts at Vicarage Road, as seen in the link above, with Deeney receiving a straight red card from referee Craig Pawson after seemingly throwing an elbow at Lucas Torreira as he went to close the ball down.

Debate raged over whether or not it was worthy of a dismissal, but Deeney clearly wasn’t impressed with the Uruguayan after the incident, as reported by the Daily Mail and seen in the video below.

Cameras appeared to pick up the 30-year-old call Torreira a “f****** p****”, while the report above also notes that Deeney called Pawson’s decision “f****** embarrassing” as he swapped a word with Arsenal boss Unai Emery too on his way towards the tunnel.

To their credit, Watford looked the better side for the most part even when reduced to 10 men and they will have been left disappointed not to come away with anything against the Gunners.

However, they’ll now have to do without their captain as he serves a suspension, and based on the evidence provided, he wasn’t impressed with Torreira, Pawson or anyone else involved for that matter.