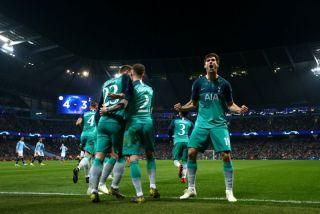 Tottenham edged Man City out of the Champions League in an epic encounter on Wednesday night, advancing on away goals after the tie finished 4-4 on aggregate.

From five goals in the opening 21 minutes, to controversy over Fernando Llorente’s goal to VAR disallowing Raheem Sterling a late winner, the game had everything at the Etihad on a dramatic and thrilling night.

City summed up the feeling perfectly with their tweet below, as there were simply no words to describe the drama that was unfolding in front of us, with the decision to disallow Sterling’s goal sparking a stunned reaction from the Etihad as the away end celebrated.

However, the reigning Premier League champions showed their class after the game with their tweet congratulating Tottenham on their win, while also wishing them well in their semi-final encounter against Ajax.

It’s great to see such sportsmanship, especially after the two clubs were involved in arguably one of the best Champions League games of all time as they not only a broke record, but put on an amazing spectacle to deliver entertainment for supporters.

While it probably will struggle to match this, the two sides do it all again on Saturday as they meet in the Premier League, with Pep Guardiola having to regroup and refocus his players as they still have the league title and FA Cup to play for.

As for Tottenham, they can’t afford to lose either as they still need to secure a top-four finish, and so with plenty on the line and with City perhaps looking for revenge, it could yet be another incredible contest that awaits us on Saturday.