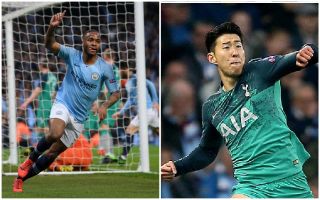 Man City and Tottenham produced a Champions League classic on Wednesday night, with five goals scored between them in the opening 21 minutes.

Spurs did hold the advantage from the first leg in this quarter-final tie, having secured a 1-0 win in the first encounter last week.

However, Raheem Sterling wiped that out after just four minutes, only to see Heung-Min Son score a quick-fire double to turn things around back in Tottenham’s favour.

While that seemingly threatened to knock the confidence out of Pep Guardiola’s men, it appeared to merely fire them into action again as Bernardo Silva struck back immediately to bring them level on the night, before Sterling scored his second in the 21st minute.

As noted in Gary Lineker’s tweet below, five goals scored in 21 minutes is now a new Champions League record for the fastest five goals in a game.

The previous record was held by Borussia Dortmund and Legia Warsaw as they managed five goals in 24 minutes, and so this encounter between City and Spurs will undoubtedly now into the history books as one of the most incredible games in the competition.

It remains to be seen who prevails to advance to the semi-finals, but the two Premier League giants have certainly done their part to provide entertainment along the way.

21 minutes is a record for the fastest 5 goals in a game in Champions League history. Previous record was 24 minutes: Dortmund v Legia Warsaw.

This is the first game in Champions League history to have five goals in the opening 21 mins.