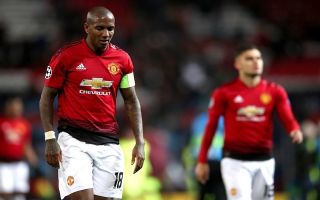 Man Utd have released a statement after stalwart Ashley Young was targeted with racist abuse following his side’s defeat at Barcelona on Tuesday night.

The Red Devils bowed out of the Champions League after a 3-0 defeat at the Nou Camp, while the aggregate score finished 4-0 as they will now switch their focus to the race for a top-four finish in the Premier League.

However, there were reports of disgraceful racist abuse online with Young being the subject of those comments, and the club have insisted that they will take action after identifying those responsible.

“We are working to identify individuals involved and we will take the strongest possible action we can against them.

“There is no place for racism within our game, or in society as a whole, and we are committed to working to make football free from all forms of discrimination.”

It’s the latest in a spate of incidents which have seen high profile figures in football face racist abuse, from the treatment of the England players in Montenegro to the controversy surrounding the likes of Mohamed Salah and Kalidou Koulibaly last week.

While it’s an issue that must be tackled by the clubs, authorities, social media platforms and many other parties concerned, this isn’t racism in football, it’s racism in society.

In turn, much more needs to be done to educate those guilty of using such slurs that it simply isn’t acceptable to use those terms in any situation for any reason. Time will tell though if that kind of widespread change can be enforced with the players noted above sadly subjected to such vile abuse.