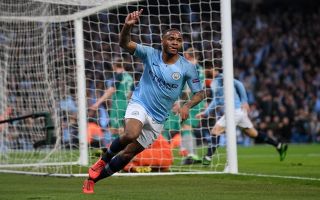 Manchester City attacker Raheem Sterling has added to his long list of impressive achievements this season, the star has become the first Englishman to do this in 10 years.

Sterling got Pep Guardiola’s side off to a flying start in just the fourth minute of tonight’s clash, the former Liverpool ace curled in a wonderful strike to beat Hugo Lloris. Take a look at it here.

Sterling then scored in the 21st minute to give City a 3-2 lead against Tottenham, the 24-year-old slotted the ball into the back of the net after a superb low cross from Kevin de Bruyne. Check it out here.

With Sterling’s double, the star became the first Englishman to score 2+ goals in a Champions League Quarter-Final since Chelsea legend Frank Lampard in 2009.

Could tonight’s game finish with the same scoreline?:

Raheem Sterling is the first English player to score 2+ goals in a #UCL quarter-final game since Frank Lampard in 2009 (vs. Liverpool).

Unfortunately Sterling’s impressive feat wasn’t enough to secure City’s qualification for the next round of the Champions League, the star’s last-gasp winner was ruled out after Sergio Aguero was deemed to be in an offside position after the referee used VAR.