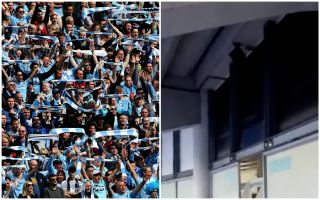 It’s been claimed that Man City may have used fake crowd noise to boost the atmosphere at the Etihad ahead of their clash with Tottenham.

As seen in the video below, it’s suggested that they played the crowd noise over the speakers in anticipation of the game, with the flags seen on he seats in preparation for the encounter.

It didn’t go to plan though as Pep Guardiola’s side were eliminated from the Champions League after a 4-4 aggregate defeat on away goals.

The Etihad was certainly rocking in injury time as Raheem Sterling thought he had scored the goal to take them through, however VAR denied them as Sergio Aguero was offside in the build up.

In turn, Spurs advance to face Ajax in the semi-finals, while City’s focus now switches to the Premier League title and the FA Cup, with or without the supposed fake crowd noise helping them along the way.

It’s worth noting that this is an alleged trick City used, based on the claim made below.

I was saying this all night. So sad if true