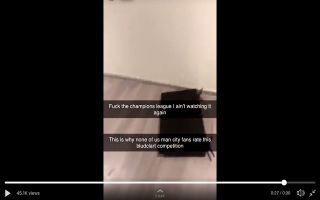 One Manchester City fan was truly heartbroken this evening after Raheem Sterling’s last-gasp winner vs Tottenham was ruled out for Sergio Aguero being offside.

In the final moments of City’s exciting clash against Tottenham this evening, Raheem Sterling scored what seemed like the goal that would send Pep Guardiola’s side through to the Champions League Semi-Finals, Sterling’s chance to be City’s hero was denied after the referee referred to VAR.

City talisman Sergio Aguero was found to be offside in the buildup to the goal and the referee rightfully disallowed the goal, one Manchester City was devastated to see the goal disallowed and lashed out on his TV.

Just about every emotion in 120 seconds ? pic.twitter.com/j6CTZByTXQ

Manchester City have the chance to exact revenge on Spurs on Saturday afternoon, there’s no doubt that fans will be waking up early to catch this clash after tonight’s barnstormer.