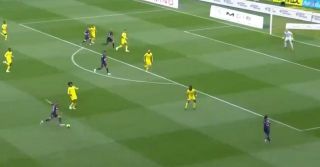 PSG are making hard work of wrapping up the Ligue 1 title as they slipped to a 3-2 defeat to Nantes on Wednesday night.

Thomas Tuchel’s men suffered a heavy 5-1 defeat to Lille on Sunday, which in turned postponed their Ligue 1 title winning celebrations for the second consecutive weekend.

However, they’ll have to wait even longer now as they couldn’t avoid slipping to a loss at Nantes, with this rocket of a goal from Dani Alves not enough to inspire them to victory, as seen in the video below.

The Brazilian went on to score an own goal as PSG fell apart either side of the half-time break, and so now they’ll have to try again when they face Monaco on Sunday night.

It’s worth noting that they do still boast a 17-point lead over second-placed Lille with just six games remaining and so it is ultimately just delaying the inevitable.

However, they would certainly have hoped to have wrapped up the title in style rather than stumbling their way across the finish line…

What has Dani Alves got in his boots?

The Brazilian with an absolute rocket for PSG! ? pic.twitter.com/HbbNY0sY5a