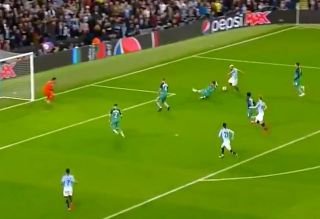 Sergio Aguero made his mark when Man City needed him as he scored their fourth in their thrilling Champions League encounter with Tottenham.

As seen in the video below, the Argentine marksman will owe a huge debt of gratitude to Kevin de Bruyne for setting him up, as the Belgian’s bursting run from midfield was matched with an equally brilliant assist.

However, Aguero certainly had plenty left to do to find the back of the net, but he did so in style as he powered a brilliant effort past Hugo Lloris.

That in turn gave Man City a 4-3 lead on aggregate, in what quickly became a Champions League classic with five goals in the opening 21 minutes of the game.

Time will tell if Tottenham now have an answer or if Aguero’s goal will prove to be decisive in securing Man City’s place in the semi-finals.

Raheem Sterling and Bernardo Silva were both on the scoresheet in the first half, with Heung-Min Son scoring both of Tottenham’s goals.

Opinion: Ronald Koeman was the only sensible choice at this point for Barcelona
More Stories Kevin De Bruyne Sergio Aguero