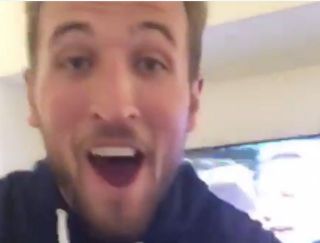 Harry Kane is currently sidelined with an injury but that didn’t stop him celebrating Tottenham advancing to the Champions League semi-finals on Wednesday night.

The 25-year-old sustained an ankle injury in the first leg between the two sides last week, and could now miss the rest of the season.

However, Spurs seem to be getting the job done without their talisman as after seeing off Huddersfield at the weekend, they were able to eliminate Manchester City from the Champions League after a thrilling second leg encounter at the Etihad.

A double from Heung-Min Son and a late effort from Fernando Llorente ensured the game ended 4-3, but after finishing 4-4 on aggregate, Mauricio Pochettino’s side advanced to the last four on away goals.

It was an enthralling clash between the two Premier League sides, and as seen in the video below, Kane certainly enjoyed the eventual outcome with a brilliant reaction he posted on social media.

Spurs face City again this weekend, and they’ll be hoping to not only give themselves a boost in the race to finish in the top four in the Premier League, but they could also now deal another blow to Pep Guardiola’s men as they target the title and a potential treble.