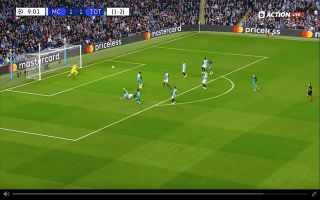 Tottenham forward Heung-Min Son scored a brilliant quick-fire double against Manchester City this evening, who needs Harry Kane when Son can do this.

In the 7th minute of the tie Son picked up the ball on the edge of the box after a deflection and fired a first-time effort towards goal. City stopper Ederson will be kicking himself as he failed to stop the ball from hitting the back of the net.

Less than three minutes later Son fired Tottenham into the lead with an exquisite curling effort. Son received the ball inside the box after a pass from Christian Eriksen, the star looked up and curled a lovely effort into the back of the net.

Heung-min Son bends one in to score his and Spurs' second in Manchester ?

The game has got off to a flying start, Manchester City will need to tighten up at the back if they are to have any hope of going through – the last thing they’ll want is to crash out on away goals.