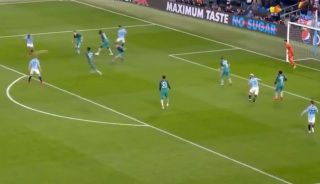 Man City wiped Tottenham’s advantage out after just four minutes in the second leg of their Champions League tie with Raheem Sterling scoring a superb goal.

As seen in the video below, the City winger latched onto a pass from Kevin de Bruyne after some excellent play from the Belgian to create the chance.

However, Sterling still had plenty to do and produced a wonderful curled finish past Hugo Lloris to bring Man City level in the tie after losing the first leg 1-0 in north London.

That was only the beginning of the drama though, as Heung-min Son scored a stunning quick-fire double to seemingly turn City’s fast start into a nightmare, only for Bernardo Silva to score just moments later to drag them back into contention.

It remains to be seen how this one plays out, but with four goals in the opening 11 minutes, it certainly didn’t disappoint for the neutrals…