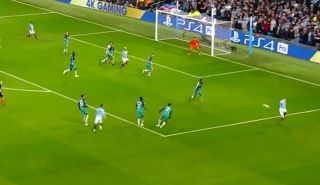 There were goals galore in a sensational Champions League tie between Man City and Tottenham on Wednesday night, with Raheem Sterling helping himself to a brace.

The 24-year-old had given City the lead after just four minutes to put them level in the quarter-final tie after losing the first leg 1-0.

However, Heung-Min Son scored a quick-fire double to turn the clash on its head again, before Bernardo Silva produced an instant response to give Man City belief of turning things round.

That was all in the space of 11 frenetic minutes to start the game, as the two sides gave the fans a break for around nine minutes before Sterling got on the scoresheet for a second time, as seen in the video below.

It was largely down to the brilliance of Kevin de Bruyne again, as the Belgian did brilliantly to whip in a dangerous cross to find his teammate at the back post, who then applied the finishing touch.

With the tie now evenly poised at 3-3, this really could be anyone’s game as both Man City and Tottenham went all out and put on a real spectacle in what is quickly becoming a Champions League classic.