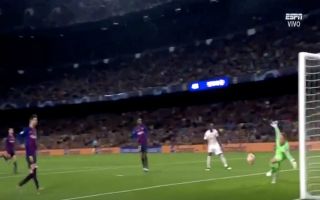 Barcelona goalkeeper Marc-Andre ter Stegen pulled off one of the saves of the season during a Champions League victory over Manchester United on Tuesday.

The Spanish champions secured a 3-0 win at Camp Nou to progress to the semifinals of the competition 4-0 on aggregate, thanks to a Lionel Messi double and a superb Philippe Coutinho strike.

United’s best moment came deep into the second half, when Diogo Dalot found Alexis Sanchez with an inch-perfect cross in the box, but Ter Stegen was not to be denied his clean sheet.

The German kept Sanchez’s produced an unbelievable save to push Sanchez’s goalbound header around the post, much to the delight of the home faithful.

Check out Ter Stegen’s amazing save below, via Twitter.

Ter Stegen does superbly to deny Sanchez to keep his clean sheet!
pic.twitter.com/utxSOcGiSG